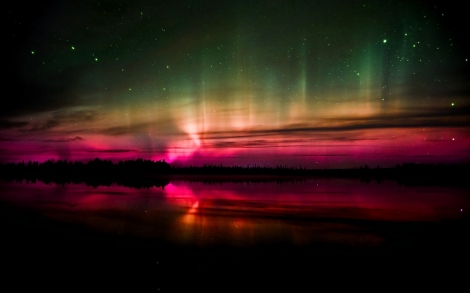 Click to watch and listen to this epic fractal animation as you read this poem.

In the beginning, the Genesis of all

When all was dark and nothing was

There moved the essence of God

The only thing to claim existence

He knew that one simple phrase

Would serve as the conception of everything

And through His great power

He would pour life into being

Taking that which does not exist

And shaping in a glorious instant

The foundations of reality

And the cornerstone of time

“Let there be light”

He called her “good”

And how very good she was

She stretched her brightest fingers

Into the darkest corners of the universe

The very first of God’s creations

For He knew in this world he was about to shape

There would be no life without light

He knew how many lost

Would only ever find their way

By the luminous hope she offered them

He knew how much doubt she would dispel

By spilling her truth-like essence

Into the vast expanses of the unknown

He knew that without her

In fear and hopelessness, forever lost

Trapped in a void of darkness

Confounded by their own naivety

So He Created Light

He speckled the heavens with her radiant splendor

With a brush of Grace, he let the canvas of the sky

Drink in her most saturated expressions

To be displayed ten thousand ways

And in ten thousand sparks

He captured her subtle magic

In the simplistic wonder of the firefly

Whose congregant dance in the velvet midnight

Her majesty lights up the night

By the amber rays of the moon

And her life-giving warmth

Wraps the earth in energy, strength, and life

Through the radiant beams of the sun

dedicated to my beautiful daughter, Aurora, on her 1st birthday