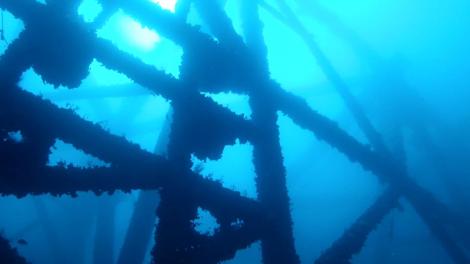 “Some 200,000 lifeforms call the oceans of Earth their home. And though I must needs count myself among them now, I’ve never felt more alone.” ~The Memoirs of Doctor Earnest P. Mallory

The rhythmic smack-i-ta, crack-i-ta of the sparks grew stronger the farther down the corridor I went and the closer to the conduit I drew myself. I wasn’t sure if the voltage would be enough to harm me, but I was not in any hurry to find out. I would be cautious. It just so happened that I was in a dead end of the science ward.  My only choice was to move forward. The ignition release I had activated was triggered by the lever in the maintenance hall of the science ward. I wondered what idiot engineer thought of that plan. One would think a place as labyrinthian and state-of-the-art as this would have placed such a destructive little feature in some protected, central hub or something, but no. Let’s put the “instant apocalypse and mass tragedy” button in a glorified maintenance closet! Sounded good to me. It reminded me of the soft-spot on an infant’s skull. That had never made sense to me.

My progress was slow. My head still hurt from whatever I had smacked it on. The cabinet under the beam, presumably. My powers of perception had clearly been effected, because I suddenly felt a sharp and biting pain surge through my right arm and down my body. I lost my balance as my limbs danced about involuntarily. My jaw slammed itself shut forcefully – biting my tongue in the process. The blood was warm and salty. A tangy metallic flavor filled my mouth as I fell to the ground. Seeing the arcing blue sparks from the end of the conduit inches from my face only confirmed what I already knew. I had stepped right into that puddle and absorbed God-knows how much electricity. I rolled through the muddy water to the other side till I felt like I was clear from the danger. I began to shiver and convulse from the shock of the whole experience. I pulled myself up into a fetal position and curled myself against a wall. I had come to the end of the hall. I was at a T, an intersection of two hallways. It suddenly seemed odd to me how disoriented I was. I had worked in the science ward every day for the past year at least – maybe more. I should know this place like the back of my hand. Surely a plunge 2 miles into the belly of the North Atlantic would not reconfigure the layout and architecture so drastically that I couldn’t recognize where I was. And yet, for some reason, I had no clue as to which direction I should take or what I might find. On the other hand, it was almost completely dark and everything was jumbled by the chaos. Maybe I just had to get my bearings.

I had just about summoned the stamina to stand up again when I heard something terrifying. Up till now, there had been an oppressive silence, save for the sparks. But suddenly I heard a horrific scream. It seemed distant and close at the same time. It was definitely human – and if my scattered brain could interpret, there was a great deal of pain, terror, and even rage saturating the horrible utterance. It didn’t last long – but I was certain I had heard it. I couldn’t tell if it was the electricity that had literally jolted me awake, or if it was the sudden realization that I was not alone, but my senses were suddenly and acutely in tune with my surroundings. Silence. As if nothing had even happened. The sinking feeling of isolation began to creep back in. I tried to focus.

I could hear the groaning of the structure as the North Atlantic tested it’s integrity with tremendous pressure. There had clearly been breaches in the glass. At least enough to allow some water in. I could hear steady dripping sounds echoing through the halls. The temperature must have been plummeting as well. I think rolling through the icy puddle had made me aware of how cold I had become. I listened – hoping and fearing that I might hear that cry again. What if someone was in trouble? Should I help them? My survival instinct instantly reminded me how another person would likely compound my obstacles and decrease the likely-hood of a successful escape. Oxygen alone had become a priceless commodity now – it might even be advantageous to kill them on the spot for that reason. The thought of sharing breaths with someone I had already damned to the deep seemed a luxury I could not afford. Then again, perhaps we could help each other. I still had no idea how I was to get out of here. My conscience imagined this as an opportunity to redeem myself. Immediately following that thought, my intellect reminded me why I buried this place to begin with. Could I justify bringing one of them back home? At least the problem had been quarantined and contained for now.