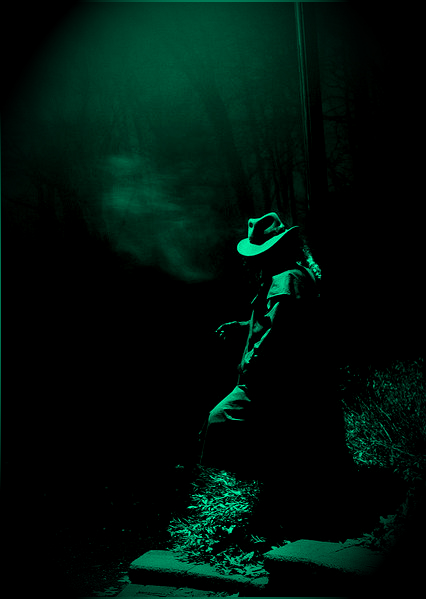 Betwixt his thumb and index, he slides the felt above,

And with a raised’ eyebrow, he winks toward his love.

The cape about his shoulders conceals his brilliant steel,

And flutters in the wind as he now turns upon his heel.

The moonlight casting shadows as the figure mounts his steed,

He fades among the willows down the road of ‘Lily Reed.’

And there upon the threshold, he leaves the maiden fair,

Wilting petals on the doorstep from the flower in her hair.

Tracing down her graceful profile, can be found a tender tear,

For the worst of things can happen to the one she holds so dear,

And as she sees the man of shadow disappear away from sight,

She sighs a little prayer for him to make it through the night.

The echoes in the valley can be heard as riders pass,

The whispers of a phantom to be taken down at last,

So by bloody mercenary, corruption feeds upon his foes,

But the people now are hopeful, for he came in time of need,

And they watch the hero pass along the road of ‘Lily Reed.’

Soldiers wait for him in ambush, to catch him in their snare,

They see him in the distance and they wait with evil glare.

He slows into a gallop, for he knows there’s something wrong,

But he keeps his forward motion and begins to hum a song,

He thinks of his dear lady, and he looks into the sky,

He begins to weep a little, for he doesn’t wish to die.

He remembers all the people, and the reason he exists.

He knows they need their phantom, and he clenches both his fists.

In the middle of the rode he halts, the moon now to his back.

He dismounts his beast and stands alone, a figure cloaked in black.

His brim is down, toward the ground, as he prepares to speed,

The mountebanks who wait for him beside the ‘Lily Reed.’

The contenders now approach the road with sword and pistol shot.

The five of them are evil men who wickedness have wrought.

He draws his blade, his choice is made, the foes he will dispatch,

And they will rue they ever knew this phantom whom they catch.

His brim now raised and eyes a glazed, for he will make them bleed,

Among the dirty ditches that flank the ‘Lily Reed.’

Now with a twirl, a leap, and whirl, his blade he lets descend,

Upon his first opponent, his wicked life to end,

The second he does parry, and with a load of lead,

He sees the villain trip and a fall, a bullet through his head.

The next he fiercely pierces right through his crimson vest,

And crimson even darker starts to stain the victim’s chest .

And then a short, but loud report of steel and powder shot,

Is heard throughout the valley, but the hero hears it not.

The breath he breathes is taken, and he begins to gasp,

His arm he throws about him, his heaving chest to grasp.

He stumbles to the cobble and the stones about his feet,

His crimson blood a falling as the road and him now meet.

The moonlight all about him illuminates the scene,

The blood with dirt a mixing, the pain he feels is keen.

He struggles from a pocket a fist that trembles so.

The fist is full of petals which the wind begins to blow,

And as his vision starts to fade, our hero finds the need,

To whisper slow his lover’s name upon the ‘Lily Reed.’

One response to “The Road of Lily Reed”